Today I went to JoAnn Fabrics to buy material to make Avery a “Minnie Mouse” costume for Halloween. While these stores are always a bit overwhelming and hard to navigate, this one seemed particularly disorganized. I already had the pattern with the picture of the red dress with white polka dots on it, so I showed it to an older saleslady and asked her if they had any material like that. “Oh no,” she said, shaking her head vigorously. “A lot of people have been in here asking for that material and they didn’t send us any this year.” As I started to walk away, she said “You could look over there-” pointing towards a rack of cotton fabrics-“but you won’t find exactly that material.”

So I looked over there, and guess what! There it was, exactly what I was looking for, in plain sight. She mumbled something about how it was different from the picture (it wasn’t) and I think she even sniffed with displeasure that I had been accommodated. Maybe that was my imagination. But have you ever encountered someone like that? A person who was paid to help you who seemed to actually enjoy denying you what you were asking for? I have, more than a few times. It is a really weird phenomenon, and it got me thinking about saying yes.

I know there is a lot of hype these days about how we all say “yes” to too many things, and are wildly overcommitted in so many areas. But I would posit that there are far more people whose automatic initial response to ANYTHING is no. They immediately come up with a dozen different reasons why they can’t do that, why that idea won’t work, why it would be a bad way to go. So that even when you are in a position where your JOB is to say yes, you find ways to say no, and are more than a little gleeful about it.

I think it is a really sad way to live. I know this because I have spent most of my life living that way. I grew up in a home where the initial response was always “no”. “No” was stated in many different forms, but it always came down to no, unless somehow you were clever enough to make your case to get to yes. We joke in our family that our Bible was The Worst Case Scenario book, even though it hadn’t been written yet. My father COULD have written it, and then we would have had more money and maybe he wouldn’t have said no so often. But with any request, we had to endure a long litany of all the things that could go wrong if he said yes. And people, we were not asking to go skydiving, or to the jungles of Africa. Stuff like going to a party, or the movies, or applying to a certain college, etc. It was always too dangerous, we were too inept to be able to handle the situation, or we didn’t have the money/time/resources to do it.

I do not know why my father existed in such a universe of negativity. I mean, any parent has to say no sometimes, but did it have to be such an ordeal to ask for or to do EVERYTHING? The other answer was always, “Now if I say yes, I have to consider what precedent I am setting”. Oh, that one killed me. Was he a Supreme Court Judge? Apparently if he said yes to something once, we would have hornswoggled him and he would have to say yes every time we asked to do that thing again. How horrible! I grew up as a person who sorely underestimated my abilities, my smarts, my resourcefulness, and I always aimed way lower than my dreams. I still do sometimes. It is something I am working on.

What would it have been like to have parents who encouraged me to spread my wings, to try new things, to go for it, who helped me figure out how I was going to finance something I wanted to do, who believed in me? I will never know. And of course I cannot blame them for my life now. I have chosen to be someone who was afraid to try things that might be hard or challenging, to say no, no, no to my dreams. To always play it really safe. I believe that is the kind of person my father chose to be, too. I don’t know why he was afraid, so afraid. But now I am afraid and I want to stop it.

When my son was about four, he piped up loud and clear after having endured a day of “no” to this and that, “No, No, always NO! THE ANSWER IS YES!”  It was hilarious, and everyone remembers him doing it. It kind of makes me cringe now, because I hope I wasn’t as wet of a blanket as the one I grew up smothered underneath. But what if the answer IS “Yes”?

I have a magnet on my refrigerator that shows a portly woman in dress shoes with a raincoat and umbrella and frilly hat, leaping into a puddle, and it is captioned “Have you ever noticed that ‘What the hell” is always the right answer?” I really really love that. I am a long way from living that way, but it could happen. I am trying. I am trying to dream big and believe that I can accomplish far more than I give myself credit for. And honestly, I am not talking about the power of positive thinking, although there is nothing wrong with that-ok, I admit, I am a leetle cynical about the power of positive thinking. It is more about just being willing to try, having no idea if you are up to the task or not. It is saying yes and meaning that you will work with all your heart and soul to make it happen, whatever the result. It is not having the first thing you say to yourself, when you think of something you might like to do, be NO.

Because I think when you live like that for too long, you really do start to enjoy saying no to yourself and everyone else. Like that salesclerk today, it gives you more satisfaction to shoot someone down than to discover that the answer was there all along. It is so much safer. Safety is terribly seductive. And desirable up to a point. But as the ultimate goal and value for one’s life? Well, HELL no to that. 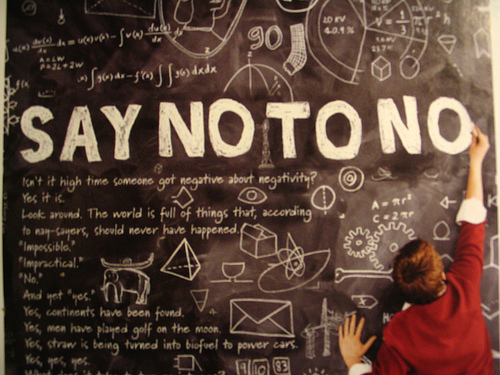 2 thoughts on “The Answer is YES!”