I had a dream last night. In my dream I was wandering around my childhood home, looking in the various rooms and wondering where everyone was. It was one of those long, murky confusing dreams where the house didn’t look exactly like it actually did then, or does now. Maybe I was dreaming more about how I felt about the house than what it actually looked like. I was sitting in a room and suddenly my father walked in.

My father died in 1992. He was only 68. My relationship with him was very very difficult. There was great damage done on many fronts which I have spent most of my life working at healing from. I wasn’t particularly sad when he died. It makes me a bit ashamed to say that because it seems so unnatural. But honestly, I had to distance myself from him to survive. Doing that left me with very little natural feeling for him, beyond the polite interest I would feel in any stranger. God became the Father in my life in a very profound sense. I stopped trying to drink from an empty well and found one that gushed water over every inch of my heart.

But that is not my point. My point is that when I saw him I was really and truly happy to see him. On one level I knew that he is dead but he looked very alive and normal, not like he looked after he became ill with heart disease, but how he looked about ten years before that. I said, “Dad?” with a kind of incredulity. I asked, “What are you doing here?” It will amuse members of my family reading this to know that he answered that he had come back to interfere in the next election. It was not a gushy lovey-dovey reunion, just very matter-of-fact and weird all at the same time.

When I woke, I realized that I wasn’t mad when I saw him, or hurt, or full of grievances and ready to rumble. I just felt glad to see him. I felt the love that I felt for him sometimes. I felt our connection. And for the first time I felt hope about seeing him again, beyond this earthly pale. I understood that I had forgiven him.

I can only liken the feeling to that moment in “The Lord of the Rings” when Galadriel takes the Ring offered by Frodo and speaks her vision of what powers the ring would afford her, were she to appropriate it. A terrifying and horrifying vision, for what would happen to Middle Earth were one of its most trustworthy and good leaders to succumb to the terrible temptation of Absolute Power? Frodo can only hide his head and tremble.

But then it is over and she drops the Ring. Her face is filled with beatific light and she says, “I have passed the test.” She has feared how she would cope with such an offer for a very long time, one imagines. Would the goodness that she had cultivated be enough against such naked lust and greed? It was. And how relieved we all are that it is. How hopeful we are that we would stand as well.

I feel like I had a precious glimpse into the future when I dreamt of my father. That forgiveness, while never easy, is REAL. If you keep releasing, keep blessing, keep giving your hurt to God, something actually HAPPENS that cannot be taken from you. How lovely it will be to see my father again one day and not have any anger towards him.

Forgiveness is not forgetting. It is not saying that what happened to you, or what was done to you, is okay. It is releasing the hurt to God for HIM to judge and deal with as He wishes. When you think of God as being the most just of judges, and right and pure in all that He does, this affords a surprising measure of comfort and relief. It is also true that when you think about the many things YOU have done wrong, ways that you have hurt others, you can hope that God will deal with you with mercy and kindness, not condemnation. And in hoping that you can begin to hope that for the one who has wronged you. It is most often not a quick process and it takes persistence on our part. But really that is all it takes. If you keep doing it, you find your feelings changing in ways you could never imagine. As the burden of unforgiveness lifts off of you, you realize how very heavy a load it was, how exhausting, how sapping. You realize it truly was never yours to bear.

It has taken me years and years to get to this point, and it has involved significant agony of the soul. I will never say forgiving is easy or no big deal. It is the very biggest of deals. But it truly is worth it to be somewhere in the process of forgiving, rather than stuck in a deep rut in the middle of the road with no way to go forward, and no way to go back 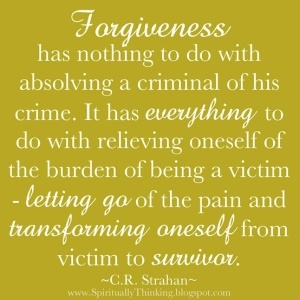